Weeks of pro-democracy protests in Hong Kong are battering shares in the city’s property developers and pushing its benchmark stock index closer to a bear market.

About 446 billion Hong Kong dollars ($56.9 billion) has been wiped off the market value of the nine largest Hong Kong real estate companies since April, according to data from Refinitiv.
The Hang Seng Properties Index, which tracks a bigger pool of real estate developers in Hong Kong, has plunged 19% since its recent peak in April.
The broader Hang Seng index has fallen more than 16% during the same period. Both are at risk of falling into a bear market, which is defined as a drop of 20%.
Hong Kong is the most expensive city in the world to buy a home, with local residents and international investors alike paying huge money for small apartments in the financial hub.
The market slide began earlier this year because of the impact of the trade war on Hong Kong’s economy and China’s slowdown. The city’s political turmoil has piled on the pressure. Some of Hong Kong’s biggest real estate tycoons called Tuesday for the protests to end.
“Recent protests have triggered huge selling pressure for developers’ stocks, because people are jittery about the escalating unrest and no one knows when it could end,” said Louis Wong, director of Phillip Capital Management. “It has already dampened buyers mood on the property market.”
Hong Kong’s economy only grew 0.6% in the second quarter from a year ago, the weakest rate in a decade. Escalating protests have made the outlook even more uncertain, Wong said.
A weakening yuan could also crimp the buying power of mainland Chinese, who are the major buyers of Hong Kong properties. Several developers have postponed sales of luxury home projects this month.
“Developers are turning conservative about the market’s outlook. So they decided to pause and watch,” Wong said.
Sales of new homes plunged 60% in the past three months, compared with the first quarter, partly due to lack of project launches, data from Midland, a real estate agency, showed. 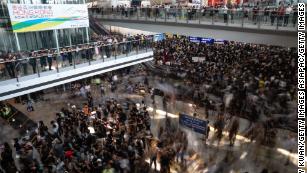 Separately, data from property agency Knight Frank showed Hong Kong’s residential sales volume fell 21% in July from a year prior.
The company predicted prices for mass housing in Hong Kong to drop 5% in the second half of 2019.
Sun Hung Kai Properties (SUHJF), a developer controlled by Asia’s third richest family, has lost HK$115 billion ($14.7 billion) in market value since its peak in April.
That was equivalent to nearly one third of its market value back then.
CK Asset (CHKGF), owned by Hong Kong’s richest man Li Ka-shing, has also lost more than HK$80 billion ($10.2 billion) in market cap since its highest level this year in early April.
Shares in Swire Properties (SWRAY), Henderson Land Development, Sino Land, New Development Development, Wharf Real Estate, Hysan Development and Great Eagle Holdings have all plunged more than 20%over the same period.
Source: cnn

These states had the most housing hardship during the coronavirus pandemic

These states had the most housing hardship during the coronavirus pandemic