by admin
in Building Failures
22
0

Thirteen people were confirmed dead with sixteen others sustaining varying degrees of injury when a church collapsed in South Africa’s KwaZulu Natal province.

The incident which occured late Thursday took place at the Pentecost Church located at the Dlangubo area of eMpangeni in the province.

This incident happened after their church building collapsed on them during a Passover service, the state-run South African Broadcasting Corporation, SABC, said in its report.

Health officials say the building collapsed due to heavy rainfall in northern parts of the province. A team of government officials are set to visit the scene on Friday, the SABC report added.

The KwaZulu Natal provincial government has sent words of commiserations to the affected families with the promise of a full scale probe into the incident.

Ahead of a long Easter holiday, authorities are also tasking motorists to be responsible whiles using the roads. The season has often recorded accidents due to speeding and drunk driving hence the awareness creation efforts. 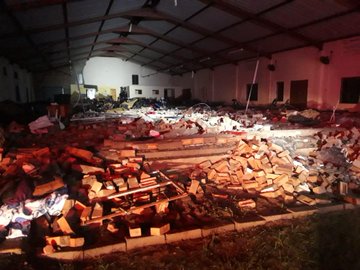 #SABCNews #sabckzn Disaster management team has been dispatched to the Dlangubo area of eMpangeni on the north coast of KwaZulu-Natal where 13 congregants of the Pentecostal church were killed last night.

Ronaldo Puts Up Manchester Mansion on Market for N1.5bn

Ronaldo Puts Up Manchester Mansion on Market for N1.5bn